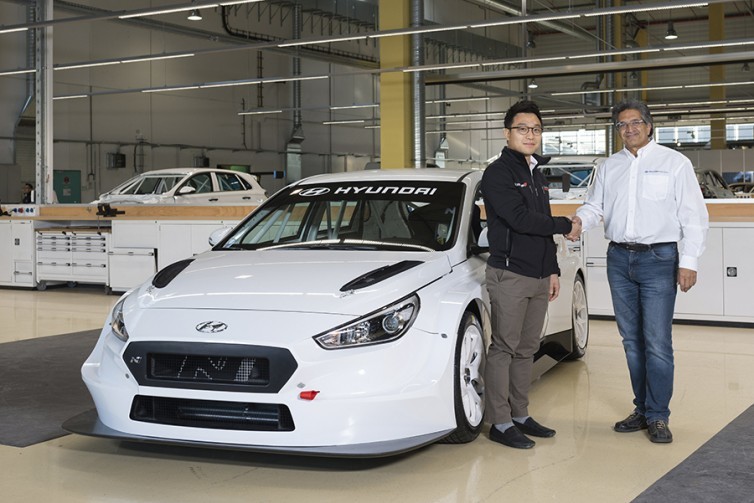 The first Hyundai i30 N TCR cars were delivered

Hyundai Motorsport has delivered the first two i30 N TCR cars to customers when representatives of teams from Korea and Italy were welcomed by management at Hyundai Motorsport’s headquarters in Alzenau, Germany.
Team Principal Michel Nandan and Customer Racing Manager Andrea Adamo greeted the representatives of KMSA, from South Korea, and Italian squad BRC Racing Team and took part in the ceremony formally handing-over the cars.
One of the biggest names in motorsport in South Korea, KMSA showed their interest in the i30 N TCR soon after the project was officially announced in February 2017. They are technical partner for a number of racing series in the country, including Hyundai one-make championships. However, the purchase of an i30 N TCR is the first step for the team in the category, which is represented locally by the TCR Asia and the newly confirmed TCR Korea series.
BRC Racing Team, the racing department of BRC Gas Equipment, has filled the role of development partner for the i30 N TCR throughout the year. Following their very positive first-hand experience of the performance and reliability of the i30 N TCR they have selected to continue their work as privateers, focusing on translating their knowledge of the car into successful seasons in the TCR series.
Hyundai Motorsport Customer Racing manager Andrea Adamo said: “The first deliveries of i30 N TCR to customers is obviously a major step in this very important project. It marks the end of a busy period of development running at circuits and events around the world for the team. We have developed a very strong package for the TCR regulations, and that is shown in our results in the three events where we have competed. The handover of the first chassis is only the start of the work we must do, not only in building cars for our growing list of customers, but also supporting the teams as they prepare for the 2018 season to make sure they are able to compete at the front.”
Deliveries of the i30 N TCR to customers will continue throughout the winter.