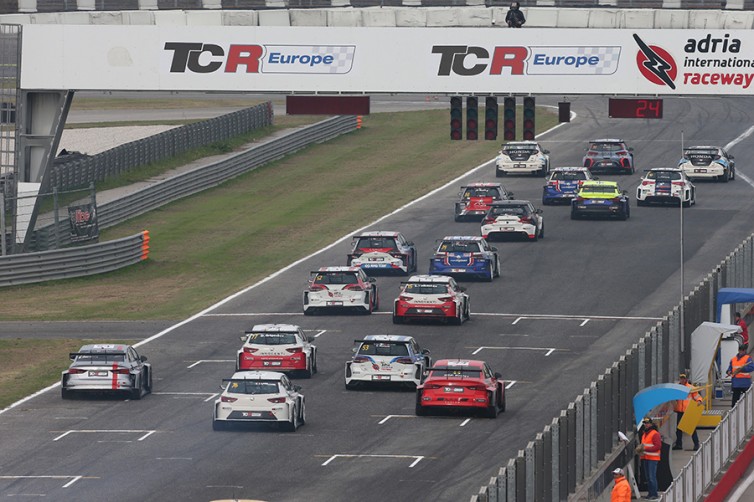 The TCR Europe Trophy will be upgraded to a proper international series from next year.
The 2018 TCR Europe Series will be run over six race meetings on some of the most glamorous racetracks in Europe and will be promoted by the TCR Euro Series Ltd., a subsidiary of WSC Ltd.
The TCR Europe Trophy was first held in 2016, using events of the existing TCR national series in Benelux, Germany, Italy, Spain, Portugal and Russia and was won by Pierre-Yves Corthals at the wheel of an Opel Astra entered by DG Sport Compétition.
This year the Trophy was held at a one-off event at the Adria International Raceway, where DG Sport retained the title with a Peugeot 308 driven by Aurélien Comte.
Next year’s change will mark a further step forward, establishing a third regional series for TCR cars that adds to the existing TCR Asia and TCR Middle East.

Promoter Paulo Ferreira explained: “We thought the time had come to launch a proper European series. It is a logical evolution for those teams that are already racing in the TCR national championships and aim for stepping up into international competition.”

The event format will feature the Qualifying session split into Q1 and Q2, and two 25-minute races with standing starts and a top-ten reverse grid for Race 2.
Two titles will be awarded, for Drivers and Teams.
The entry fees will be 17,500 euros for the full season and 4,000 euros ‘race-by-race’.
All races will be streamed live on Motorsport TV and www.europe.tcr-series.com.

Marcello Lotti, CEO of WSC Ltd. commented: “We are very pleased to add another gem to TCR’s rich crown. The enthusiasm and competence of Paulo Ferreira, combined with the glamorous venues the series will visit, will surely make it one of the favourites of TCR teams.”