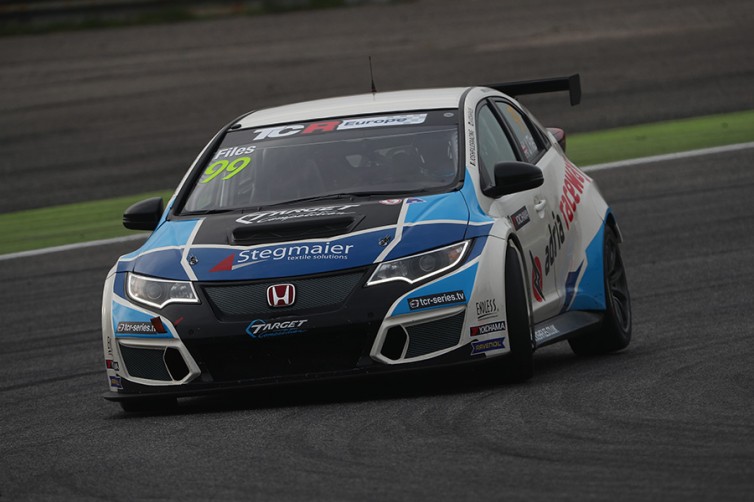 Gabriele Tarquini claimed pole position for the TCR Europe Trophy at Adria International Raceway. At the wheel of his BRC Racing Hyundai i30 N, the Italian driver emerged as the fastest in both, Q1 and Q2, posting a best lap of 1:19.341 that no one was able to match.
However, as the Hyundai is running with a temporary homologation document and therefore it is transparent as far as point scoring is concerned, the five points for the pole position were awarded to Josh Files of Target Competition. The Briton qualified his Honda Civic as second fastest with a lap of 1:19.518, only two tenths behind Tarquini and three tenths ahead of his teammate Giacomo Altoè (1:19.815).
The other drivers remained above the 1:20 mark, with Luca Engstler (Liqui Moly Team Engstler Volkswagen Golf), Luigi Ferrara (V-Action Racing Alfa Romeo Giulietta) and Maxime Potty (Team WRT Volkswagen Golf) filling the positions between four and six; the three of them were covered by only one tenth of a second.
Antti Buri (LMS Racing) qualified the fastest Audi in seventh, ahead of Francisco Abreu (Team Novadriver Volkswagen) and Aurélien Comte (DG Sport Compétition Peugeot 308).
The latter will share the front row of the top-ten reverse grid for Race 2 with Florian Thoma who qualified tenth in his Volkswagen and will start from the pole position.
The first race will start tomorrow at 12:35 on the distance of 25 minutes plus one lap (live timing and streaming at www.europe.tcr-series.com and www.tcr-series.com)