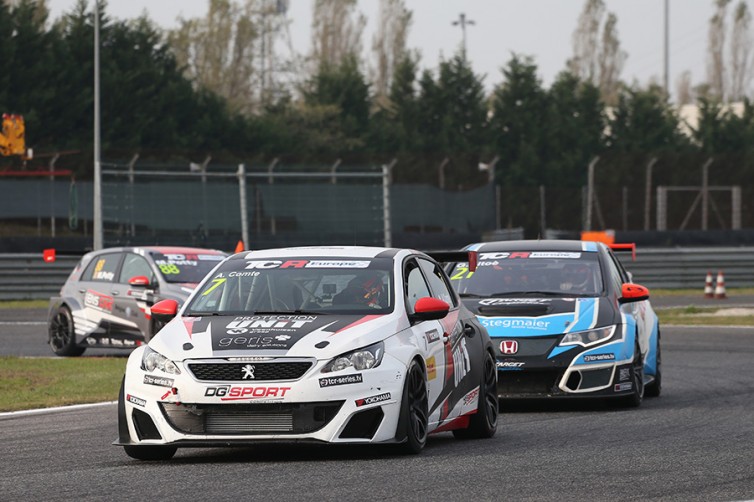 The TCR Europe Trophy at the Adria International Raceway delivered an unexpected result, as Aurélien Comte was able to grab the title at the wheel of his DG Sport Compétition Peugeot 308, the smallest car in the field with its 1.6 litre engine and standard bodywork.
Comte did not cross the line first in any of the two races that were won by Josh Files (Target Competion Honda Civic) and Gabriele Tarquini (BRC Racing Hyundai i30 N). And yet the young Frenchman benefited from the fact that Tarquini was not allowed to score points – because his car is still racing under a temporary homologation form – and that Files took what seemed to be an unnecessary risk in Race 2, which resulted in a penalty.
However, Comte was a worthy winner as he led the second race until halfway before surrendering to Tarquini and then he was able to keep Giacomo Altoè (Target Competition Honda Civic) at bay until the chequered flag.
They finished on equal points, but Comte was awarded the title thanks to his better results, while Files was classified third in the Trophy, only two points behind Comte and Altoè.
The Teams’ Trophy went to Target Competition; DG Sport Compétition was placed second, and is worth to remember that the Belgian outfit had already won last year’s TCR Europe Trophy with Pierre-Yves Corthals in an Opel Astra.
Today’s second race delivered a thrilling show, with six drivers involved in a close battle for the lead. And – most important – they were at the wheel of cars from five different brands: Hyundai, Peugeot, Honda, Audi and Volkswagen.
Giovanni Altoè won the special trophy for the cars equipped with a DSG gearbox at the wheel of a Volkswagen Golf GTI.